DENVER, Jan. 3, 2018 /PRNewswire/ -- DaVita Inc. (NYSE: DVA), a leading provider of kidney care services in the United States and in 11 countries around the world, today released a recap of the company's most notable 2017 achievements, marking its 17th year bringing high standards of care to patients around the world. 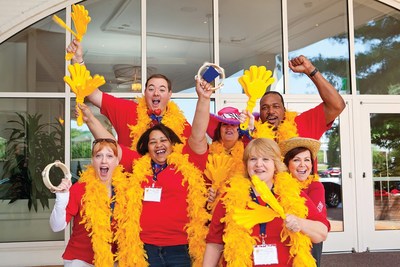 "Every year brings both change and challenges, but through intentionality, our teammates continue to yield achievements that we are proud of," said Kent Thiry, chairman and CEO of DaVita. "It's not easy, but our mission is to care for our world, each other, and help our patients live the highest quality of life possible."

DaVita's top 2017 milestones and achievements include:

CAPG's Standards of Excellence™ Award – This year, The Everett Clinic in Washington, and HealthCare Partners in California, both DaVita Medical Groups, were awarded CAPG's Standards of Excellence™ (SOE®) Elite awards. Physician groups that receive this distinction go above and beyond to provide effective, high-value, patient-centered care that aligns with national quality standards.

DaVita Selected To Participate in New ACO Model – DaVita was chosen as one of 28 new Accountable Care Organizations (ACOs) participating in Medicare's Next Generation ACO Model. Through the Model, DaVita will work with the Centers for Medicare and Medicaid Services Innovation Center (CMS Innovation Center) to provide Medicare Fee-For-Service beneficiaries with quality care, while reducing growth in Medicare expenditures through enhanced care coordination.

CMS Recognizes Integrated Care in DaVita's First Performance Year – ESRD Seamless Care Organizations (ESCOs) like DaVita achieved savings of $75 million during the first performance year of the pilot program, suggesting that the renal community is uniquely positioned to deliver success on a large scale, which would positively benefit patients, the health care system and participating providers.

DaVita Rallies Support in Urging Congress to Pass PATIENTS Demonstration Act  – Over the past decade, multiple models have proven the effectiveness of integrated care for dialysis patients. The bipartisan Dialysis PATIENTS Act builds on these historical models to allow broader scaling of integrated care. To date, there are more than 120 co-sponsors of the bill.

DaVita Responds to Numerous, Catastrophic Natural Disasters in 2017 – DaVita teammates responded to several natural disasters in 2017, including Hurricanes Harvey and Irma, both of which collectively impacted more than 34,000 patients, teammates and their families. Clinics in hurricane-impacted areas were given $2,500 each to give within their community where there was the most need – this culminated in nearly $1 million in donations given to disaster relief this year.

Patient Educational Videos Launch – DaVita Kidney Care launched a series of videos to offer a fun, user-friendly way to educate patients and caregivers on topics such transplants, diet and nutrition.

DaVita Helps Raise Awareness of Patient Mental Health – Joining the efforts of Mental Health America's annual "May is Mental Health Month," DaVita worked to educate patients about the importance that mental health plays in an individual's overall well-being. DaVita social workers screen patients for depression twice a year in an effort to ensure patients are receiving the best possible quality of care and living the highest quality of life.

In 2017, DaVita won over 40 major awards, including the following:

100 Most Influential People in Health Care – Kent Thiry was ranked No. 31 among the most influential people in U.S. health care by Modern Healthcare. DaVita believes this list should be called the "most influential companies in health care" because this recognition is both a testament to its teammates' hard work and commitment to patients, as well as an indication of the growing acknowledgment of the contributions DaVita makes to the health care industry and to the world at large.

Freedom-Centered Workplace – For the 10th straight year, DaVita was ranked among the world's most freedom-centered workplaces by WorldBlu.

Caring for Our Patients

Awarded Medal of Excellence from American Association of Kidney Patients – A DaVita teammate, Facility Administrator Philip Varughese received a medal of excellence for the role he has played in supporting scientific progress on behalf of patients in the renal community.

Caring for Each Other

Best Clinical/Top Doctors lists – Many physicians and clinics of HealthCare Partners and The Everett Clinic were named "Top Docs" or best medical facilities by community newspapers and business journals.

Best Employers for Healthy Lifestyles – For the first time, DaVita's many health and wellness programs – including Village Vitality, HealthyWage and Match the Mayor – were recognized as among the best by the National Business Group on Health.

Best for Vets – DaVita was recognized by Military Times Edge as a "Best for Vets" employer for the eighth consecutive year.

Top Veteran-Friendly Companies – DaVita was honored as a top veteran-friendly company by U.S. Veterans Magazine for the fifth consecutive year.

DaVita Introduces DaVita® Health Solutions – The DaVita Health Solutions care model expands primary care outside of the traditional doctor's office setting to treat patients when and where they need care most: in the home, at a post-acute skilled nursing facility (SNF) or within a dialysis center for patients who suffer from end stage renal disease (ESRD).

DaVita Clinical Research Continues to Grow Alliance Site Network for CKD Trials – DaVita expanded its research services to include an Alliance Site Network, a turnkey solution for pharmaceutical companies seeking high-quality, dedicated research sites that specialize in patients with chronic kidney disease (CKD) and comorbid conditions directly related to CKD, but who are not yet on dialysis.

DaVita Supports Teammates with Military Background – Over the past seven years, DaVita has hired more than 2,500 veterans. The "Village Veterans" programs encourage new veteran teammates to receive mentorship from company leaders as they transition to new roles within the company, and include:

DaVita Donates More than $2.2 Million to Nonprofits Across the Country – For the seventh year in a row, the DaVita Way of Giving campaign has given clinical teammates throughout the U.S. the opportunity to directly donate to nonprofits in their communities. Since 2011, teammates have directed donations of nearly $11.3 million through the program.

DaVita Achieves Goal of Majority Diverse Board – DaVita's eleven member board of directors now includes three women and four minority men, making DaVita's board one of the most diverse of any Fortune 1000 company.

DaVita Reports on Corporate Social Responsibility and Innovation – DaVita released its 2016 Community Care Report, which highlights progress on key initiatives supporting the company's vision for corporate social responsibility (CSR) – the Trilogy of Care: Caring for Our Patients, Caring for Each Other and Caring for Our World.

DaVita Partners with Denver Post for Season to Share Fundraising Campaign – Replacing previous sponsor, the Robert R. McCormick Foundation, DaVita has pledged to match 50 percent of donations raised by the campaign, which will give grants to more than 45 Denver-area agencies that serve in the areas of children and youth, health and hunger and homelessness and hunger.

DaVita Celebrates 10 Years of Sustainability – DaVita's corporate sustainability program Village Green was created in 2007 with the goal of reducing the environmental impact of the company's operations in field facilities and in business offices. Village Green also educates both teammates and patients on the environmental impact of these changes and what they can do to help.